Naiveté is not a good strategy

By David WestonMay 19, 2020Uncategorized
No Comments 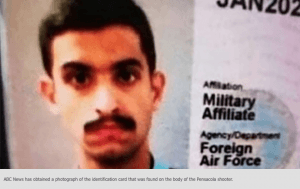 This week U.S. Attorney General William Barr announced that Saudi Arabian student pilot Mohammed Saeed Alshamrani, who shot three fellow students in Pensacola, Florida was an undercover la-Qaeda operative. It is hard to imagine that something like this can happen. I know there are a lot of ways to lie your way into positions of power. I know that Islamist Jihadists are playing the long game and he has been in grooming for years, but it is also a reflection of how the internal intelligence apparatus is struggling for relevancy. So many assumptions are made that ought to be recalibrated, especially in light of the long list of breaches within our military and government.

Read John Guandolo’s current Understanding the Threat article and you will see the long list of people that have been caught in the act of national security compromises. Here are just a few that Guandolo highlights.

The first muslim Imam to offer prayers inside the U.S. House of Representatives, Siraj Wahhaj, is an unindicted co-conspirator in the 1993 World Trade Center bombing, was a character witness for the Blind Sheikh Omar Abdul Rahman, has sons & daughters who ran a jihadi training camp for children in New Mexico, and is an advocate of jihad and the implementation of sharia in America.

Abdurahman Alamoudi was the Islamic advisor to President Clinton, worked as a “Goodwill Ambassador” for the U.S. State Department, and created the Muslim Chaplain Program for the Department of Defense. Alamoudi is now in prison because he was a financier for Al Qaeda.

Senior Muslim Brotherhood leader Imam Mohamed Magid, who is also the leader of the jihadi ADAMS Center in Sterling, Virginia, was given the FBI Director’s Award by FBI Director James Comey, and sat on the Homeland Security Advisory Committee with a SECRET clearance under the Obama administration.

Imam Anwar al Awlaki was a revered “moderate muslims” who gave presentations to leaders inside the Pentagon to explain how “peaceful” Islam is. Yet he is now dead after the U.S sent a missile down on him because – as it turns out – he was the leader of Al Qaeda in Yemen.

U.S. Army Major Nidal Malik Hasan killed fourteen (14) people at Fort Hood, Texas in 2009 as an act of jihad. Prior to this massacre, Hasan’s call with Al Qaeda leader Anwar al Awlaki was intercepted by U.S. intelligence, but the call was deemed “religious rhetoric” by ignorant agents/analysts because they were not trained to understand Hasan was getting Islamic legal authority from Awlaki to conduct the attack.

ISIS Commander Gulmurod Khalimov participated in 5 counterterrorism training courses in the United States and Tajikistan through the U.S. Department of State, AND, “All appropriate Leahy vetting was undertaken in advance of this training,” according to State Department spokeswoman Jhunjhunwala.

This is just the tip of the iceberg. There needs to be an overhaul of the government’s security screening process and it needs to begin with an honest appraisal of how Islamic jihadism conducts its operations, selection of operatives, and its targeting process. Here is a link to Guandolo’s article.