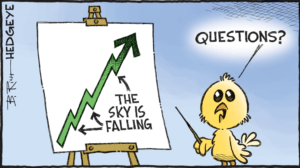 “Every time you take a train, step into your car, walk into the shopping mall, go to the airport- every single time, something could happen. That’s how terrorism works.” Ayaan Hirsi Ali

“Light in a messenger’s eyes brings joy to the heart, and good news gives health to the bones.” Proverbs 15:30

I would like to bring you a different kind of report this week: Good news! What if I told you that the number of terrorist attacks and terrorist-induced deaths have consistently decreased globally, over the past four years?

In this issue of “More than Meets the Eye,” we will take a look at the data that supports the notion that terrorism as we know it has actually declined over the past several years. We will discover what that means globally. We will also explore some of the reasons it is decreasing, and will examine what we can expect in the future as a result of the decline, because as usual, there is more than meets the eye.

“Terrorists are getting worse at the one thing they seek to do: terrify people.” Is that true? Are you less afraid today of a terrorist attack than you were several years ago? Do you feel safer? Do you ever contemplate the notion that the Global War on Terror has been won? The data on this matter is as confusing as ever.

On one hand, in January of 2018, 73% of U.S. adults said that defending the country against future terrorist attacks should be a top priority for President Donald Trump and Congress – making this one of the most frequently cited priorities, along with improving the educational system (72%) and strengthening the nation’s economy (71%). On the other hand: “For more than a decade after the 9/11 attacks, both the threat of terrorism and the ins-and-outs of U.S. counterterrorism policy dominated American national discourse. But not anymore. Concerns about terrorism and counterterrorism are still there to some degree, to be sure, but they’ve been elbowed aside as the primary focus of national debate and scrutiny.”

Are Western citizens less concerned about terrorism today than they were several years ago? Do they have reason to believe that things have gotten better? Let’s consider a couple of different variables.

Let me start by reasserting my basic principle as a “terror-ologist.” The aim of terrorism is not just to kill and maim and destroy. A primary objective of terrorism is to create terror. The main goal of terrorists is to cause mayhem and fear so that peoples lives will become desperate for change, any kind of change. A terrorist will have been successful if he causes you to altar the way you live your life. Often the changes made are initiated by fear. We do not make our best decisions when we are afraid.

Variable one. Yes, there has indeed been a decrease in the recorded numbers of attacks and deaths by terrorists since 2016. The data is clear, although perhaps misleading. That is the problem with data. Clarity is most often determined by the interpreter of that data. Globally, terrorist attacks are downas are death totals. Terrorist attacks in the United Kingdom, Spain and Francehowever, are up considerably, in both severity and frequency. The encouraging news is that in many parts of the world which have been experiencing flagrant terror attacks, such as Nigeria, Pakistan, Iraq and Afghanistan, terroristic attacks have decreased.

Everything in me wants to believe that the Global War on Terrorism has been won and we can all sleep in peace now. But my analytical side sees another part to this equation. There are few signs, other than some sketchy data, which indicate that the potential threat will abate anytime soon. Here are several reasons why I believe that.

Analysis: Currently, there appears to be a pause on the operational tempo of terrorist organizations. The break can be linked to several global initiatives.

It is only fair to say as a reminder, that being killed by a foreign terrorist in the US, statistically, is very unlikely; some analysts will tell us it is a 1 in 20 millionchance. Of course, it becomes very existential if you or one of your family members is that “1 in 20 million.”

We live in a world where we regularly calculate our vulnerabilities. We have learned to measure our safety. We have developed ways of coping with threats. We evaluate threats by three premises: how well we minimize our risks, maximize our defenses and maintain our spirits.

We minimize risks by gaining information and by making decisions based on our understanding of the situations surrounding us. Each of us has a different tolerance level for risk. The more situationally aware we remain, the better decisions we will make as we seek to reduce our risks. Maximizing our defenses entails preparing forays into our environment. We lock our doors, use electronic security devices, buy weapons, train in defensive arts, form neighborhood watch groups etc.

Lastly, we maintain our spirit. We understand God’s Word and act consistently based on it. We love at all times, serve at all times, give at all times. We do not place our confidence in ourselves, but in the Holy Spirit as we depend on him to guide us through these turbulent times.

In our country, we have traded much of our safety and security for convenience. We need always to remember though, that sometimes there are monsters under our beds.