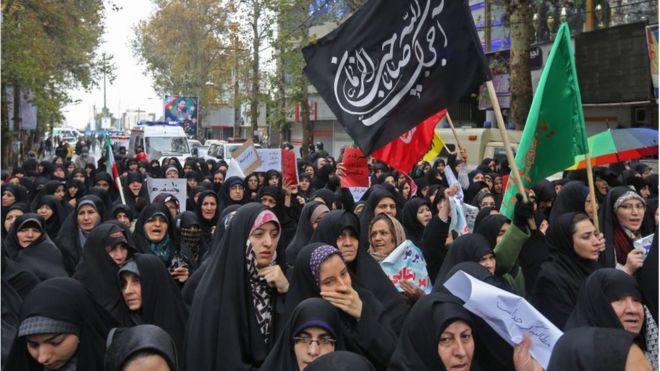 In an effort to continue to provide my readers with updated global security intelligence, I came across a story in the Uzbek version of BBC this morning. So I translated the story for you below. Once again, this is quite a significant event and it is being underplayed and overshadowed by so many other less significant news stories.

I take full responsibility for any translation mishaps from Uzbek into English.

Iranians have been demonstrating in the streets for five days.

Most of the larger Iranian cities have been under siege by a large number of security forces as “starving” people take to the streets.

According to reports, the authorities have used force to suppress the demonstrations – actually using automatic weapons and snipers.

The BBC has footage showing security forces firing on protesters from behind walls and trees.

According to Amnesty International, over a hundred people have been killed in the past five days.

However, the organization believes the real numbers could be much higher:

So far, more than a thousand people have been arrested during the demonstrations. Many more have been injured.

The government is declining to release official figures. They are accusing foreign governments of planning an “armed rebellion” in Iran.

Most schools in Iran are now closed, football matches canceled, banks and other buildings have been set on fire.

The United Nations has strongly condemned the use of force against protesters.

They have urged Iranian officials not to do so.

The protests began after the government raised the price of gasoline by three times.

It has also been fueled by the wrath of the people for decades.

The government has also virtually shut down the internet since last Saturday.

The Iranians feel isolated from each other and the outside world.

As America has tightened its sanctions, Iran is under severe economic pressure.

Inflation has reached almost 50% and unemployment has increased severely.

The economic crisis has grown to the extent of the violent suppression of popular anger.

The use of snipers against the protesters has made the protests even more unimaginable than in recent years.

Our video reflects the latest situation in Iran.   https://www.youtube.com/watch?v=ZPyR8wDjmZo

If you would rather read this article in Uzbek yourself, here is the link: https://www.bbc.com/uzbek/central-asia-50492718

If you are not yet a subscriber to “More than Meets the Eye,” the weekly global security intelligence digest, you would benefit greatly by subscribing here: https://www.morethanmeets.co/#sign-up