The more research I conduct, the more I realize that the situation in Syria becomes crazier and crazier. The sectarian undercurrents that divide the country and the region have become the central pathology of the Syrian conflict — they will impede its resolution. It is imperative that we understand the varied dynamics of the situation there if we hope to even remotely pray intelligently for what is happening. Since the peaceful demonstrations during the “Arab Spring” in Syria in 2011 the situation in Syria has deteriorated. Let me address a couple of reasons that the Syrian situation has degraded to such an enormous humanitarian catastrophe so that we can understand better how to think about what is happening there. 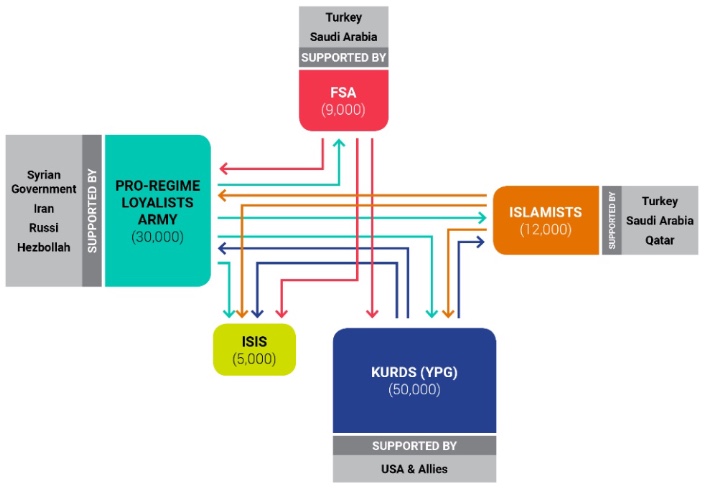 Arrows show who is fighting against whom. As you can see, the lines of conflict are complex.

The Bible tells us that “the fervent and effective prayers of a righteous man availeth much.” (James 5:16) I think I understand the definition of fervent prayer. It is prayer that emanates from our hearts as it reflects the heart of our Father. But what about effective prayer? It is prayer that is informed. It flows from an accurate knowledge of the mind of God and the things for which we are praying. Prayer is effective, especially as it reflects the mind and heart of God.

It would be easy to put our heads in the sand and simply ignore all that is happening in Syria. It is too complex! It’s so far away. Surely God has better things for which he wants me to spend my time and emotional energy. What does any of this have to do with me?

We simply cannot as Christians ignore what is happening to these people in the Middle East today. Thirteen million Syrians have been left homeless. Almost 500,00 have been killed with millions injured. If our desire is to have the mind of Christ in all things, we cannot ignore the plight of all these people. We cannot NOT pray for them. We must intercede for them and do whatever Father asks of us regarding them. Christians can no longer afford to stand by and watch. The escalation of violence, poverty and human abuse surrounds us. We will not live immune to its nefarious effects.

Why should we act? Because it is why Christ came to this earth, to bring restoration and redemption to all peoples….including the people in Syria.

What can you do? Let me start once again by challenging you to begin with prayer. Pray effectively. How can you do that?

You can go and/or give. There are millions of refugees who have fled the fighting in Syria.They have fled to countries like Turkey, Jordan, Lebanon and all of Europe. They are living significantly below human subsistence levels in unimaginable poverty. You can serve these people by going to help them or by giving to support those who are going. Very soon there will be a plethora of needs beyond our ability to even imagine.

Here are a few resources that will help you in knowing how to give and go: